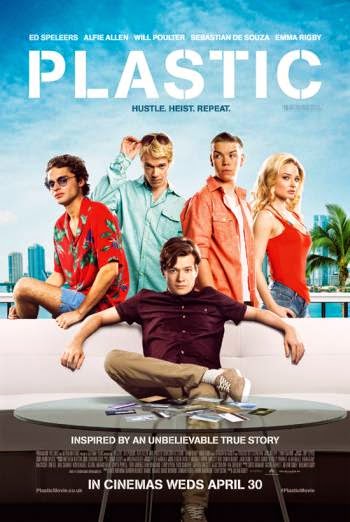 Interestingly, Plastic is based on a true story. Whenever a film has that phrase flash up on screen it makes you question it more - except Plastic doesn't have that effect. The film follows a group of four misfits, Sam (Ed Speelers), Fordy (Will Poulter), Yatesey (Alfie Allen) and Rafa (Sebastian De Souza). Living what seems the high life successfully running a credit card fraud scheme, their comfortable lifestyle is disrupted when they steal from the wrong man. The only way to get this sadistic gangster off their trail is to give him what he wants and of course he wants money. Except this needs to be the biggest scam they have ever pulled off.

This is where the girl comes in. Just so happens that Sam's school crush, full lipped and well hair sprayed hair Frankie works at one of the worlds leading credit card companies - handy eh? Once she is on board the gang head to Miami to earn back their lives and pay off Marcel. Sun, beaches and endless cocktails - but is this really what Frankie signed up for?

This script is laced with lies, manipulation and deceit. On the surface this group of 'lads' seem pretty content with scamming their way through life except we are never really given any reasons behind their motivation to pursue such actions in the first place. Additionally, the character development was a little absent. They all began as unlike able characters and remain that way until the credits roll. Plastic's main problem was the execution of lines. It felt like half the time this rather young cast forced that one line out as if to say, 'guys you need to laugh now'! Despite that, Alfie Allen gave a great performance and had the majority of good lines, which certainly made one chuckle. After Game of Thrones, it's nothing this actor can't handle. It was disappointing to see EE BAFTA's rising star Will Poulter as the on screen clown. The poor boy was dressed up in virtually every scene, along with Skins star Sebastian De Souza sporting a couple of fake moustaches. Starring as Marcel, and doing a phenomenal job of playing a trigger happy hardcore gangster is TV series Dracula's Van Helsing, Thomas Kretschmann. It was clear that the only reason Emma Rigby was on screen was to run around scantily clad on the beach and pout excessively. Surely they could have utilised this Hollyoaks actress a little more?

After getting over all that, the production values were intriguing. Plastic was shot in an almost independent way and was a breath of fresh air when it comes to teen flicks. Considering this is the latest work from director Julian Gilbey who provided us with Rise of the Footsoldier (2007) and A Lonely Place to Die (2011) Plastic is very light in comparison. The British crime scene is still there and violence is certainly present but nothing compared to what this man can really do. Plastic is a raw, British film not without it's faults but entertaining nonetheless.