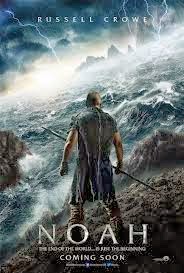 After Black Swan (2010), Requiem for a Dream (2000) and The Wrestler (2008) it seems you can't go far wrong with Darren Aronofsky - until you witness Noah. The production values were there, the narrative was there, the talent was there all to be let down by one major aspect for any film - the script.

"In the beginning there was nothing". We are first thrown into a bible lesson of the biblical story of Cain, Abel and Seth which helped put things into perspective before it becomes Gladiator on water. At no stage of the film do you find yourself empathising with Noah and his trying destiny 'The Creator' has chosen for him. Not that Russell Crowe failed as Noah, it just seemed a shame to see an actor as he wasted in such a role. The blatant disregard for human life over nature was too apparent. The entire film was laced with environmental connotations, only for everything to get swept away in a apocalyptic flood to punish man for eating an apple.

Acting beside Crowe yet again, is the wonderful Jennifer Connelly who brings a glowing maternal force to the screen. In a world where one cannot live without fear of being hunted by man, she gives the viewer hope. Not to mention she completely steals the show when it comes to her performance, even if she has limited screen time. Their two eldest boys Shem (Douglas Booth) and Ham (Logan Lerman) served their purpose, but by no means gave stellar performances. Not even your luscious lips can save you now Douglas. However one casting choice did bring a surprisingly good effort, ensuring us she is much more than the fluffy haired witch Hermione Granger. Emma Watson brings emotion and fierceness to her orphaned Ila. The casting of Ray Winstone as the descendant of Cain, Tubal-cain worked to a certain degree, but only because his character was a barbaric carnivore that wants revenge. Nothing the man can't handle.

So the animals came in two by two, hurrah - except they were poorly CGI generated ones that quite frankly let the film down. Along with the representation of The Watchers appearing as a cross between The Iron Giant and Transformers if they were made of boulders, let's say the budget didn't go to the SFX department. The films saving grace came in the form of weird and wonderful montages. In fact, such dreamlike sequences evoke thought of Malick's art cinema approach and physiological themes represented in Aronofsky's previous work. If only the film explored these aspects further, rather than produce dull dialogue and a hybrid of Darwinism and Creationism. Noah was an overall visually stunning feature, albeit not what one expected from the trailer and certainly not what anyone expected from such an acclaimed director.