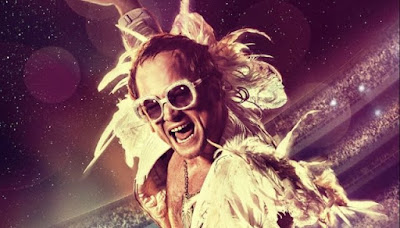 Do we really need an entire film about Elton Hercules John?

Bohemian Rhapsody seemed warranted and obviously went down well, yet is this just a jump on the bandwagon ploy - shall we expect a Mick Jagger blockbuster in six months’ time? I’m sure a large percentage of the population hasn’t forgiven Elton for Kingsman 2 yet, but boy is Rocketman a well needed dose of realism, music and mayhem.

First off, if one were to cast a young Elton John, Taron Egerton wouldn’t even spring to mind, but a pleasant surprise is in store. We know this guy can act, we know he fly and now we know he can sing. Taking on this iconic musician, Egerton’s ‘Eggsy’ is a distant memory. This man oozes talent and the outfits alone make it tricky to see him as anything other than the budding rock star that is Elton John. Dexter Fletcher, director of indie gem Eddie the Eagle takes on this beast of a musical fantasy and after the mishap with credits for Bohemian Rhapsody, the care and energy that has gone into this project shines brightly through every scene. Whilst, Lee Hall writer of Billy Elliot knows exactly how to tug on those heartstrings.

This isn’t all diamond encrusted pink tinted glasses, sell-out gigs and making history – this is a deeply insecure individual who spirals into an abyss of hatred and addiction. As we see an eccentrically dressed fiery orange devil with spectacularly sparkly horns (not to mention the outrageous red angel wings) make an 'Aragon' entrance into rehab; dark hefty undertones seep through therapy sessions tethering this tale into a little neat bow. Mental health is currently on everyone’s radar and the melancholy moments of this deal with subjects that you would never even think someone like Sir Elton John ever has to deal with.

Explored in a meaningful and informative manner (approved by the man himself); Egerton embodies a self-destructive man with fame and talent that he simply can’t deal with. If you can stomach the obligatory exploration of a child sob story told through high pitched notes, the weighty middle chunk is where it's juicy. It doesn't hold back when it comes to breaking the news he a homosexual, poof, a fairy to his own mother who disregards his feeling like her empty Martini glasses and it's moments such as these that drive this man to drugs and drink. Aspects are spelled out a tad too much with an odd 'eye roll' line yet this doesn't take away from the crowd pleasing performances. Kudos to the entire crew of supporting actors here; Madden is stunning, juxtaposed to his brut of a man in Bodyguard and Bell brings his a-game. Watch out for the laughs a plenty when Stephen Graham pops on screen too. 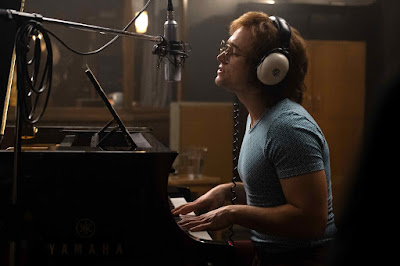 Jam packed with themes, strains of stories, ripples of romances and passionate performances, Rocketman sores above the stars bringing an explosive cinematic feature to the screen. Under all the glitter, gems and extravagant attire, there is a deeply lonely man who had to fall to rock bottom until he truly saw how talented he was and of course - he's still standing. Copious amounts of quirky symbolism are disappointingly diluted by too many moments of realisation; however it serves its purpose aiding Elton as he transforms into his true self. Magnetic choreography makes way for euphoric sequences making it near impossible not to tap your foot through these fabulous renditions.

It’s insanely difficult not to compare this to Bohemian Rhapsody, albeit this takes flight to a different tune shedding light on a man and his life that we thought we knew. Even if you aren’t an Elton fan, familiar tunes invade your brain whilst your eyes are subjected to a visual feast of colour and sequins galore.