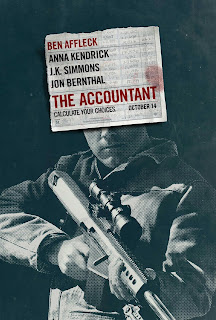 When you see a film titled 'The Accountant', it doesn’t exactly draw you in does it? Sitting in an office, going through files and counting numbers isn’t what you want out of a film and thankfully for the most part it isn’t anything like that. Although, what is in store is a sleep inducing, inaccurate portal of an accountant come assassin suffering with autism. Yes, you did hear that right.

What The Accountant appears to be trying to establish is equilibrium between ‘A Beautiful Mind’ and ‘John Wick’; yet the execution here isn’t nearly as clever as the aforementioned. All this is; is a predictable and formulaic mash up of genre’s that fails on virtually every level. Meet Christian Wolff (Affleck), a seemingly troubled man who is a whizz with numbers, but before we get into it, the neatly compact flash backs of his troubled childhood bombard the screen just to give us that back story we all so desperately apparently need to see. At first glance such context helps, only to be used to bring this confused script back down to earth. One minute this wants to be an action thriller, the next a romance about how to deal with autism around women, oh and throw in two brothers reunited after years apart. Anyway, back to our main man.

The fact we have a leading man with autism here brings a refreshing feel to our screens. Having someone insanely good with math but so socially awkward made for a few giggle moments and gave our ears a break from the sound of bullets flying through the air. Such qualities gives our protagonist a certain edge that in his line of dangerous accounting work he can certainly use to his advantage. As Wolff takes on a new client it seems there a greater things at play which results in a fight to the death revealing the man behind the operation to be the one person we all thought it was from the moment we saw him on screen, eye rolls and signs are sure to emerge – the hair was a dead giveaway.

This is nothing Affleck can’t tackle with his eyes closed. His recent Bruce Wayne has paved the way for a brooding, let’s just get the job done attitude and this is basically the same performance without Alfred. Sadly, Anna Kendrick was severely misplaced in her role as the sweet, ‘just doing my job’ Dana Cummings.  She had no reason to be there; this wasn’t a demanding role nor did it present her in a different light than we have previously seen. It simply could have been any female actress, up and coming or a recognisable face to match Affleck, this plotline really didn’t need to be here and would have saved a good 25 minutes of seat shuffling time. Credit, where credits due, there’s one twist that might surprise you.

Perhaps the biggest problem we all face is that we can’t help but see Affleck as anything other than Batman... Go home and quickly put Gone Girl in your DVD player and remember what Affleck is truly made of.