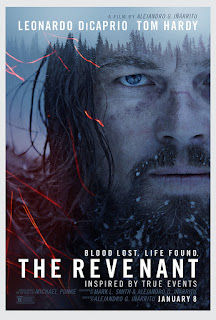 Having the words 'Inspired by True Events' on virtually every piece of marketing is a risky game, albeit this film picks up that risk, tears it apart and puts it back together with the help of Golden Globe winner Leonardo DiCaprio as legendary explorer Hugh Glass. Out on a hunting mission in the 1820's Glass survives being mauled by a wild bear and is practically left for dead by one hell of a selfish Tom Hardy as brute John Fitzgerald. With nothing but love and the warm memories of his family to keep him trudging through an icy winter, this man single-handedly sees how savage and ruthless Mother Nature and, indeed, humans can truly be. This is one man's tale of survival, overcoming everything the universe throws his way and against all odds achieving something remarkable.

As Inarritu sets the scene of this western of sorts, we are thrown into the middle of a battle, a battle fuelled by greed and desire. The classic white-man hunting down anyone with a different shade of skin is at the crux of this narrative. Racism is intertwined with the basic of human primitiveness resulting in a harrowing tale of archaic actions, retribution and most importantly revenge. Our lead, Glass is stuck somewhere in the middle with a half Pawnee son, Hawk (Forrest Goodluck) which only ignites fires when it comes to ignorant men on the expedition. In turn, we can't help but root for this more enlightened man, in this very clear tale of good an evil we are a witness to.

At times it is easy to forget you are watching a film as it is so easy to sit back and simply admire every pure work of art frame in all their glory. Picturesque sweeping shots of this snow drenched, smothered in wildlife, accentuates this ode to nature, as you simultaneously try to avoid shivers of chilliness. In a very Malick-esque manner, this provides us with more than just a narrative - a pure work of art that blood, sweat and tears went into to accomplishing this legendary tale. The environment almost acts as a character here, providing warmth, shelter and sustenance to the riddled with infection and weak Glass. The subtle use of imagery and dreams only enhance Glass's troubled state of mind trapped in this harsh terrain with nothing but his thoughts of revenge and his late wife to keep him going. Turning to religion only slightly consisting of undertones that reflect 19th Century traditions play on the fact that Glass is completely alone and clutches onto the thought of a higher being to make it to the other side.

Animal lovers, especially horse fanatics will find some scenes unsettling and difficult to watch; albeit provide symbolism of re-birth that enables Glass to come back fighting and face his enemies. The gallons of blood split become beautiful upon the white sheet of snow just for a split second then we are whipped back into this harsh reality of the situation. Watching a man be ripped to shreds by a bear, cauterizing his own wounds and tucking into raw flesh is terrifying to watch, forcing you to look away, yet somehow our eyes stay firmly glued to the screen. DiCaprio is made for this role. The man deserves every bit of praise that is currently circling and does nothing but impress when the camera is shoved so close all it takes is a mere breath to fog the lense. Credit is also due to Hardy as the venomous, pelt protecting Fitzgerald, as well as Domnhall Gleeson as the Captain and Will Poulter as Bridger having one hell of a start to 2016.

The Revenant has a poignant message at its heart. A film with so many breathtaking moments with equally as much violence, deceit and pillaging; not so dissimilar to our worlds current state. With an environment beyond repair, constant riots and inevitable wars, at some stage we will have to resort to such lengths in order to survive the chaos too. We are no different than the human race of the 1800's - we just have better hunting equipment and warmer North Face jackets. It's down to us to protect and preserve what we already have, including those around us.

Heading to cinemas this Friday 15th January 2016, The Revenant is both poetic and informative; a must see for all generations.