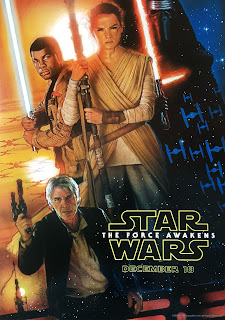 It's been a long time coming for the next installment from George Lucas - in fact it's been a decade since we have been mesmerized by the franchise.  The anticipation alone was almost too much to bear never mind the cunningly teasing trailers and posters we all had to endure, until finally the force well and truly woke up on every silver screen across the planet.

After Lucas firmly held on to Episodes: I, II and III the power has been passed onto the talented J.J Abrams. You could say this man was solely placed on our planet to direct Episode VII; but we don't want to take away Lost (2004) or Star Trek (2009) from the man now do we?  Set 30 years after the events of Return of the Jedi, Abrams is lucky enough to launch into this with a hand from writer Lawrence Kasdan, who helped pen the originals.

Within the first 5 minutes The Force Awakens adopts that original flare with a very sinister come comedic sci-fi twist from Abrams.  The usual spiel at the beginning to the epic soundtrack composed by John Williams sums up the plot rather nicely for the few that find it difficult to cast their minds back to 1983 where this story follows on from. Luke Skywalker (Mark Hamill) remains in hiding, whilst his peace fighting Princess of a sister, a little more battle privy leads the Resistance as General Organa (Carrie Fisher) alongside Han Solo (Harrison Ford) who are in desperate search for him. Fighting on the dark side (no pun intended) is new villain Kylo Ren with anger, grandfather issues (Adam Driver) calling the shots for the First Order who also happens to be hunting down the last known Jedi. Skillful pilot Poe (Oscar Issacs) stumbles upon a clue that virtually everyone and their robot wants in space and it's down to ex-stormtrooper Finn (John Boyega) and Jakku scavenger Rey (Daisy Ridley) to deliver this message to the Resistance. Teaming up with Kylo Ren is the Nazi-like dictator General Hux played by one hell of a fiery Domhnall Gleeson, through gritted teeth and emotional shakes.

These fresh characters not only ooze with talent but bring new age humor to the screen whilst keeping the classic comedy firmly in tact. Alongside dazzling effects and possibly the cutest robot in history (BB-8, the hottest Christmas toy in town no doubt) Finn and Rey become the heart of this corrupted by darkness tale. In a Disney like fashion, light shines from both of them and hope consumes the latter parts of the film. Whilst some might find this painstakingly predictable, such an approach is vital in rejuvenating this Space Opera we are all dying to see take a new direction. A kids film at it's crux, but one that makes bold decisions that the franchise needed as well as introducing bright new things that are simply fascinating.

Stemming from an idea that Lucas had in the 70's up until the final throws of  2015, The Force Awakens is nothing other than one of the best films of the year. Through various galaxies, deserts and our favorite Wookie (not forgetting the pink R2DR!), this is bigger, better and simply sets itself above the rest.  Fans who had doubts after Episode III: Revenge of the Sith will eat their hats and youngsters who have been dragged to the cinema by their parents will have trouble fighting the urge not to dust off the old VHS's and give the originals a whirl. Subtle references to will have any fan grinning from ear to ear; there is something to be seen here for everyone.