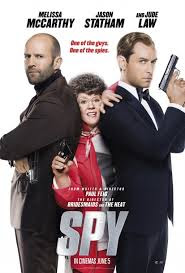 As what one can only describe as a complete rip off of Bond (and any other spy thriller, ever) the oh-so cheesy opening credits of Spy are only the start of this rather disappointing genre clash. Paul Feig regular Melissa McCarthy is in yet another painfully embarrassing comedy, that is all sorts of stupid - and not in a classic Laurie and Hardy create complete chaos way either.

The problem is that earlier in the year Matthew Vaughn skillfully merged comedy alongside the spy thriller, resulting in a superior piece of entertainment, not to mention the caliber of actors involved. With Kingman: The Secret Service still at the forefront of our thoughts, Spy needed that extra something in order to make it's mark. To some extent a rather riotous Jason Statham as agent gone fanatically rogue Rick Ford can be classed as that little something albeit, infantile humor and tasteless jokes wangle their way in demolishing any sarcasm or wit the filmmakers hoped to project.
Spy follows desk bound CIA analyst Susan Cooper; an over-weight, completely infatuated with fellow agent Bradley Fine; until revenge consumes her after she watches him die at the hands of spoilt brat Rayna Boyanov who happens to be harboring a rather discrete nuke. Sent in the field undercover to seek out who the buyer is and contain this deadly weapon, Agent Cooper appears to be having way too much fun dressing up as Dawn French. Narratively speaking, that's as complex as it gets. McCarthy gives us a bit more to chew on here than previous roles, but she is still playing it dangerously safe relying on geeky comedy and her larger lady jolly charm to get her through. In the first five minutes it is made apparent that the main aim of the film is to entertain and that it does. Yet it seems as though you find yourself laughing for all the wrong reasons. Excessive sex jokes become repetitive and wear very thin in the final throws, even if they are delivered by renowned comedy man Peter Serafinowicz as Agent Aldo ('like the American shoe shop').

In many ways Spy reverts back to quintessential slapstick cinema. When being as clumsy as Chaplin or destroying houses like the aforementioned duo were utterly hilarious. Except here, an overload of unneeded violence and amateur effects; not to mention the longevity of such gags dampened the comic relief somewhat. Jude Laws atrocious yank accent, alongside Statham's been there, done that, set myself on fire whilst reattaching limbs makes for some atrociously hilarious viewing, yet this is all the film has to offer. If Statham really wanted to be taken seriously as the next Bond, perhaps this wouldn't be the best performance to prove it.

Some semblance of message remains in tact here but it seems there is far too much flying across the screen to truly absorb it. Some cracking one-liners are had by Brit comedian Miranda Hart, as well as 50 Cent having a dig at Kanye and a versatile performance from one cute mouse, ensured that this excessively flawed film was funny nevertheless.

Spy is in cinemas this Friday 5th June.