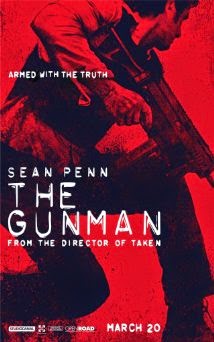 Fronting action thriller, The Gunman, Penn’s toned although veiny biceps are possibly the most interesting aspect of Taken director Pierre Morle’s latest feature. Initially, this gets off to a promisingly start only to progress into a laborious fight for freedom between what seems like the world and Sean Penn. The boxes were ticked; decent director, strong leading man, the charming Javier Bardem all to fail miserably when married on screen.

Based on Jean-Patrick Manchette’s novel, The Gunman follows an ex Special Forces soldier Jim Terrier who is dealing with the side effects of PTSD disorder. With the recent X + Y and Oscar winning Still Alice, it goes to show if expertly illustrated certain disorders and diseases can be used to create deeply moving pieces of cinema. The Gunman briefly touches on the subject of how Jim’s brain is at risk, albeit incorporating a handful of blurry, out of focus camera shots  and having Penn fall to the floor occasionally seemed an amateur way of approaching it. Conveniently, his condition takes a vacation and never gets in the way of the shoot ‘em up gun play regurgitated on screen. It’s hard to believe that after being told that loud noises and emotional stress will cause his condition to rapidly manifest, that being shot at by 20 agents whilst protecting an ex-lover Annie (Jasmine Trinca) wouldn’t have triggered an episode.

Unfortunately, we never truly empathise with the lead character simply because we weren’t given enough of an insight into his past. A quick flashback to 2006 in Congo explores it slightly but doesn’t suffice. Then there’s the love story. It turns out that not only did he have to leave behind Congo due to what happened; he also left idealistic doctor of a girlfriend Annie too. However, she shouldn’t be too upset being left with the oh-so-charming Felix played by no other than the more than capable Javier Bardem, should she? Trying to reconnect with the people from his past seems to send things spiralling and oddly an overweight f-ing Ray Winstone wouldn’t be many people’s weapon of choice. When it comes to Luther’s Idris Elba, if you have seen the trailer, you have seen the man’s longest line in the entire film. In fact, the entire cast is severely underused bar Penn and the minimal percentage that got more than 5 minutes on screen were given dull, drab lines that they tried their very best to deliver with talent.

Not only did this 54 year old actor lead this so called action flick, he also has his hand in producing and co-writing in a somewhat Stallone-esque Expendables fashion resulting in a Penn fest in every way possible for the 2 hour duration. Offering nothing new when it comes to the genre, The Gunman is an overly formulaic action thriller, with a nauseating Hollywood ending that served no real purpose. Nonetheless, The Gunman had potential but disappointingly failed to deliver us something that wasn’t noticeably run of the mill gunfire for the masses.