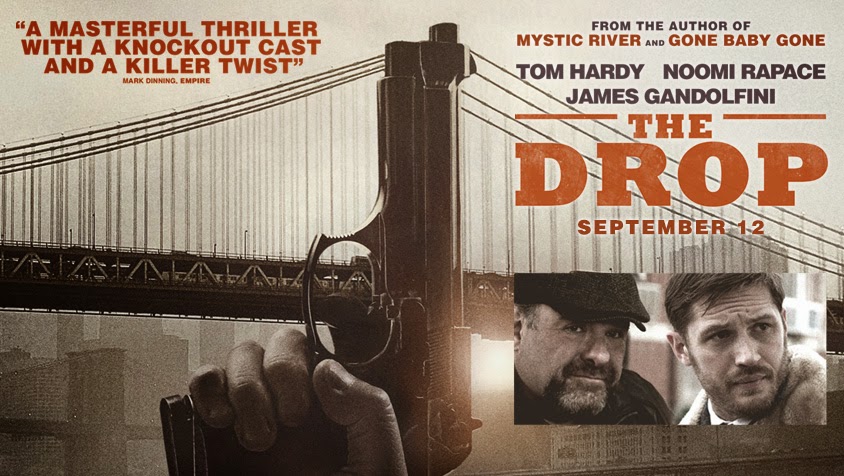 Getting caught in the middle of something you don't want to be is bad enough, never mind getting trapped in the center of a robbery gone wrong which is what Bob Saginowski (Tom Hardy) gets himself into. Before we delve into this quite simply fantastic cinematic experience, one has to take the first 5 minutes of The Drop with a pinch of salt. As an American Hardy explains exactly what a 'drop bar' is. By no means does the rest of the film hand you answers on a plate, albeit it quickly gets the details out of the way and straight into the deeper subject at hand.

"I just tend the bar" claims the quiet, reserved, bartender Bob who currently works for his Cousin Marv (James Gandolfini). Everything seems to be going swimmingly until the two are held at gunpoint and forced to empty out their cash registers to scum of the earth criminals. Just like any gangster plotline of this 'ilk', we see a hierarchy when it comes to the 'money drop' bars and a hell of a lot of "Give me my money" uttered. Except, where this film stands out, is it's ability to provide a gangster narrative without copious amounts of violence and swearing, gratuitous sex and car chases. Dennis Lahane, the genius behind this script who previously gave us Mystic River and Shutter Island, crafts it in such a way that the film doesn't need such frills. His words along with the actors portrayal of their characters are more than enough to drive this forward until the bitter end.

Many people will be watching this just because it's James Gandolfini's last performance, however man of the moment Tom Hardy continues to impress with his husky, flawless Brooklyn accent. Back in April everyone raved about his performance in Locke and although hard to beat his Saginowski completely tops it. Hardy's character is a survivor, a protector and he will do whatever is necessary in order to resolve the situation. To the point where he finds a beaten up pitbull puppy in Nadia's (Noomi Rapace) trash can, and simply can't just leave it out in the cold. He is a protector and the puppy later named Rocco almost symbolises the way in which Bob balances both the good and bad deeds he does in life - and is also possibly the cutest little pitball ever known to man. Director Michael R. Roskam, gives us some very touching moments with Bob and his new found friend in this otherwise somewhat chaotic world Marv and Bob have found themselves in. Perfectly placed lingering and out of focus shots give depth to those on screen. Even in the brief moments we see Noomi, you feel more attached to her character than ever. James Gandolfini is Cousin Marv. No one else could have played him as well as he did. On one hand we have an overweight man, chugging away, minding his own bar and on the other we have a corrupt, conniving and at times scary gangster. A man that made his mark as Tony Soprano and now with Marv gives us a very memorable final performance.

The Drop is a enthralling crime thriller with some of the most outstanding performances on screen of this year.